The Old Vicarage Hotel near Bridgnorth provided comfortable accommodation for the evening before our guided tour of the Classic Motor Company (CMC) and the Marches Centre of Manufacturing & Technology on Wednesday 25 July. The weather was a bonus so some of us took the opportunity to drive to Bridgnorth across the beautiful Cotswolds – something worthy of a B100 trip – which David Shaw already has in hand!
We were welcomed to CMC in the impressive showroom reception by Managing Director, Nigel Woodward who described the expansion of CMC since its formation in 1993. CMC grew from a passion for the Jaguar Heritage and the financial backing of Peter Neumark who in in 2016 transferred his majority shareholding into an Employee Owned Trust which now controls the company on behalf of the employees.
In addition to the undeniable quality of its restorations (it is the only company to have won the Restoration of the Year award twice), a significant factor in raising the profile of CMC as a premier restorer has been its ability to secure a series of high profile restorations, many of which were available for us to see on our tour. These distinguished restorations include:
• The Geneva show launch E-Type Jaguar (9600 HP) which is therefore the oldest surviving E-Type
• The fourth right-hand drive E-Type roadster which was owned by ‘Lofty England’ the Jaguar Team Manager
• A Le Mans winning works Jaguar D-type registered as OKV1.
• The Lindner-Nöcker Lightweight E-Type. A unique factory modified Lightweight E-Type, which was involved in a massive accident at Montlhéry in 1964. The wreckage was impounded for twenty years. Following its acquisition by Peter Neumark, CMC undertook a 7,000-hour restoration.
• The Ian Cullum reinterpretation of the Mk II Jaguar which achieved a high-profile launch but remains a one-off.
• The 1954 XK120 by Pininfarina was awarded Restoration of the Year in 2017. The car is simply stunning.
The last three of the above cars were available for us to view and if it is possible to have a downside of seeing so many extraordinary cars, it was simply that in such elevated company the many 100-point concourse E-Types that were also there, appeared commonplace in comparison! 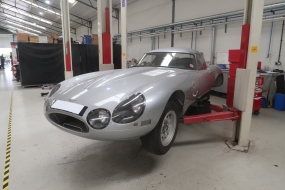 After a sandwich lunch we were treated to a tour of the amazingly equipped Marches Centre for Manufacturing & Technology which is adjacent to CMC. This superbly equipped facility is an initiative jointly funded by Grainger & Worrall, CMC, Salop Design & Engineering and In-Comm Training & Business Services. The aim is to reverse the skills gap in engineering by encouraging training in order to support local industry and generate economic growth. There was no shortage of space, machinery or facilities – the only thing that was a little short on the ground during our visit were trainees! Like our own, more modest efforts to support training in automotive engineering, we hope this initiative is successful in attracting more young people into a rejuvenated classic automotive engineering industry.
Thank you to CMC and the Marches Centre for making the B100 so welcome and providing such an enjoyable and informative visit.

Mike Timmins – Scribe for the day!

Thank you Mike! By all accounts it sounded like a fabulous tour.