Beaulieu One Hundred member, Nigel Taylor, reports back on his recent Track Day.

I am pleased to report that I am no longer a Track Day Virgin! Thanks to the Beaulieu One Hundred and Harwoods, I have now completed two charity track day events at the Goodwood Motor Circuit and I am well on my way to becoming a Pro-expert, trainee racing driver! I have the perfect track day car (a 2013 Lotus Evora S), I have my own helmet, a pair of driving shoes and I have even got a pair of inside outside Ayton Senna inspired driving gloves! All I need now is the ability! Talk about ‘all the gear and no idea’, I am that man! But, and it is a big BUT……what a brilliant way to spend an Autumn Saturday. I am hooked, totally hooked.

The day started early with an 8am drivers briefing. I listened intently whilst demolishing my second bacon butty (it was one butty really, but at Goodwood they are so posh that they cut their butties in half). Red flag, yellow flag, black flag, undertaking, overtaking, turning in points, apexes….all was explained and carefully digested – as was my breakfast. No sooner had I sipped the last of my coffee than we were called forward to collect our identity wristbands and read our last rites…then off we went to where our parked cars were ready and waiting in the pit lane.

Upon arrival my driving buddy (good friend and part-time racing instructor) and I had very wisely lined up for our sound checks to be virtually at the front of the queue. As a consequence we were the 2nd and 3rd cars in the pit lane queue. Off we marched down the pit lane, approaching our cars as if we had qualified on the front row of a grand prix, hearts beating, adrenalin rushing, eyes fixed on our racing machines which were looking magnificent in the early morning October sunshine.

Into my beautiful white Lotus I climbed with helmet firmly secured and Go-Pro camera all set up. I was ready, and I would capture the moment, every moment, every corner, every bend, every adverse camber, I would not miss a clipping point, nor would I turn in too early. Following my previous outing with an experienced driver as my passenger, I was now on my own, but in my mind I was an expert, a seasoned race champion! I started the engine, it popped and crackled in that distinctive Lotus way, I smiled….I was ready. In my fantasy world I was just about to start my very own British Grand Prix.

The marshal with the starting flag stepped forward, his flag raised, the red light on the traffic light glowing….green, flag down go, go, go! And I almost went…the excitement was so much that I nearly forgot I was the third car, and he was releasing the cars one at a time! Phew – that was close; it was almost all over before we had even started! Can you imagine the embarrassment if I had actually dropped the clutch and shot off, straight into the back of my best friend’s mini on my first solo flight! Luckily, disaster was averted and I patiently waited for my turn. It didn’t take long though, the smelt of exhaust fumes, burning clutches and the sound of squealing tyres from the Porsche and then the Mini in front of me just adding to the excitement and anticipation.

Inch by inch I edged my way forward, now slightly nervously, as well as very excitedly, to the pit lane start line…. 3, 2, 1….go go go….my turn this time… vroom vroom vroom….. pop, bang, squeal, screech …I had launched. With smoke billowing from my rear tyres I shot towards the first corner at 0 – 60 in not many seconds at all. This meant I was achieving near terminal velocity before flinging the car around the first bend in a not very elegant “Bambi on ice” style. Warm the tyres up first?? That initial and vital snippet of advice I had been given last time out completely forgotten in an instant. Never mind, I made it round and never looked back!

Having completed about 70 miles in 7 sessions throughout the day, used a whole tank of fuel and achieved a stunning 8.5 miles per gallon average, I can now safely say it was one of the most fun things I have ever done with my clothes on…. ever!

And if you have never done it yourself give it a go. Simply brilliant 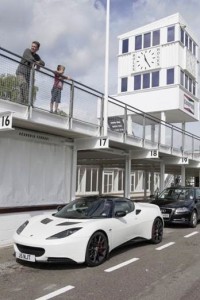 If you want to see my YouTube video of the first ever Beaulieu One Hundred Club and Harwood’s session I did in August, follow the link. I am still editing the October session!

Note from Blog Editor. Thank you for this blog post Nigel. It sounds Amazing! Great to hear that it was such a good experience. And thank you to Harwoods for inviting the Beaulieu One Hundred along for such a great Track Day.