Who are we and what do we do?

Kaye Crouch, Chair of the Beaulieu 100 Council, is an Agent for the NFU Mutual Insurance (New Forest) Agency by day.
Originally, from Lymington, Hampshire Kaye has been closely linked with Beaulieu through her family, from a very young age. Kaye has an obsession for classic vehicles and grand tourer sports cars and currently owns an Aston Martin DB9 Volante and Porsche Cayman.
Kaye has been a B100 member since 2014 and joined the council later in the year. She has been Chair since July 2018 and is passionate about this exclusive membership, which works closely with the Museum Trust to support a number of important projects each year thus helping towards maintaining our vital motoring heritage.
When Kaye is not working she enjoys skiing in the Italian Alps, fine dining with friends and walking in the forest with her husband Gary and dogs, Ted & Wilf!
Kaye can be contacted on 07551 009282 kaye_crouch@nfumutual.co.uk

Paul Denman, the approachable Close Brothers private client director, who has been in the industry for more than 3 decades, has a particular specialism in dealing with clients connected to motor racing, which is also a personal passion (Paul owns a number of classic cars). ‘I’ve been involved in the motorsport arena for over twenty years,’ he says. ‘I started working as a sponsor of a well-known professional racing driver, moving on to working with clients who raced historic Grand Prix cars. Then came more professional racing drivers, dealers and people in the motorsport media.’ Among his career highlights, meeting motor racing heroes such as Sir Stirling Moss, Jenson Button and John Surtees were some of the most memorable. Paul has been a B100 and council member since 2014.
Paul can be contacted on 07593 131689 or at paul.denman@closebrothers.com

David Shaw has always been interested in cars and motorcycles but the real passion is two wheels. “I have a small collection of mainly British bikes, mainly Triumph and Norton, and have also raced an Indian motorcycle on the land speed mecca of Bonneville!”
Seen here in Bardia National Park in Nepal, David has been a member since 2014.
David can be contacted on 07980 276952 davidshaw543@yahoo.com

Jon Horsley is a motor engineer and the owner of Classic Cars at Cadley Garage in the heart of Savernake forest near Marlborough.
He joined the Beaulieu 100 club in 2016 and was welcomed to the council in 2018.
Jon comes from a long line of Gunsmiths so engineering is in his blood, relentlessly researching a motor car his family produced in 1910 with an experimental disc valve engine, which raced at Saltburn Sands in 1913 and currently working with the new Bloodhound LSR team.
He has a many and varied car collection dating from 1938 to present day.
“The Beaulieu 100 club is not just about what you can experience but also what you can do to support our motoring heritage”.
Jon can be contacted on 07767 253375 jon@classic-cars-uk.com

Wai Man Cheung is a wealth management adviser who has worked at a high level in the financial industry for over 36 years advising business owners and entrepreneurs, and is absolutely driven to achieving the best financial profile possible for every client – and one that brings real depth of knowledge, is a great recipe for success. Speaking of which, Wai is very good at recipes! In fact he is famous amongst his friends for his Chinese cooking, passed on by his father, Hong Kong Chinese born, Charlie Cheung, who is the man credited with opening the first ever Chinese takeaway in Britain! Throw into the mix his experience as a press commentator he has also been called upon in the past to comment on financial issues.
He has a passion for Porsche and feels strongly that Beaulieu should continue to preserve our motoring heritage and the 100 club is there for fellow petrol heads and lovers of history alike. He has been a member since 2017 and with the Council since 2018.
Wai can be contacted on 07734 787804 wmc@sjpp.co.uk

Paul Cable, spent 30 years in the Medtech market focussed on delivering new and innovative technologies supporting critically ill patients in hospitals around the world. He is very passionate about end to end marketing and delivering a positive customer experience. He now runs his own company working with companies developing new technologies.
From a very early age there has been a passion for cars and with an engineering background there has always been a car in the garage that is in some state of restoration. The number of cars has grown over the years to 4, with some getting used – sometimes in anger – participating in Classic car rallies and trials achieving 1st in class a number of times.
He joined the Beaulieu 100 in 2017 and joined the council at the end of 2019.
Paul can be contacted on 07470 460590 cablepaul@btinternet.com

Richard Fuller is a Non Executive Director of Fuller, Smith and Turner PLC, many of whose pubs host car and bike rallies and also Chairman of Kempton Park Racecourse.
He has combined a passion for both four legs and four wheels and currently races a Cooper/Norton F3 500 and a Riley 12/4 Special.
Richard joined the B100 club in 2016 and is really keen on enthusing the next generation about our heritage both in terms of innovation and engineering.
Richard can be contacted on 07768 393183 richard.fuller@penwoodgrange.com 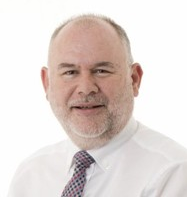 Russell Bowman, has been at Beaulieu for over 20 years, most of that time as the National Motor Museum Trust Chief Executive and Beaulieu Enterprises Managing Director.
He qualified as a Chartered Accountant in London and then worked abroad where one of his clients was conveniently located for a trackside view of the Monaco GP. He has varied commercial and charity experience, working at the RNLI immediately before joining Beaulieu.
Russell can be contacted on 01590 612345 russell.bowman@beaulieu.co.uk 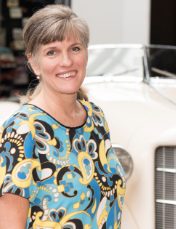 Heather Jackson, responsible for B100 Membership Development, networking and recruiting members, as well as ‘editor’ of the blog, and other things… was born in what was Northern Rhodesia, now Zambia – to London and Nottingham born parents with strong motoring connections – her father was a rally driver in his spare time, and responsible for the development of the Motoring Club in Mutare, and her mother’s father worked on the Campbell family’s record attempts.
A child of the Commonwealth, she was raised in what is now Zimbabwe, and went on to spend 20 years in South Africa before coming to the UK in 2008 and joining Beaulieu in 2016. Her son joined her in 2018 and was crowned 2020 bowler of the year at Beaulieu cricket club. A keen slalom water skier when she was in South Africa, she believes 4 wheels move the body, 2 wheels move the soul.
Heather can be contacted on 07818 454519 heather.jackson@beaulieu.co.ukbut