John and Helen Smith were the successful bidders for a seat on the London to Brighton Veteran Car Run at the 2016 Annual Dinner. Helen has sent us a lovely write up of experience they had:

”Our first glimpse of what was to come on Sunday started on Saturday afternoon.  We wandered up Regent Street and saw about 100 veteran cars, at this time we had no idea this was just the concours and that on Sunday there would be some 400 cars taking part in the event.  Looking at the cars all I thought was this is probably going to be a cold and bumpy ride!!

We had a very early start on Sunday, my alarm call was at 4.45am.  We met in The Royal Lancaster at 6.00 for breakfast with Mary Montagu –Scott, her husband Rupert, Doug Hill, Russell Bowman and David Shaw who we had met on the Yorkshire Rally, David Lillywhite, Octane Editor, and several other guests .

After a quick breakfast we all convened outside the hotel, in the cold and dark, at 6.30 to prepare to set off for Hyde Park. Beaulieu had 4 cars in total in the rally.  So far, so good, we all arrived in Hyde Park and took our places ready to start.  We had time for a quick walk around the other vehicles, during this time we finally saw daylight.  Back into the car to set off just before 8am.  What an absolutely amazing sight, all the veteran cars making their way out of Hyde Park. 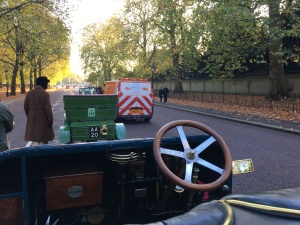 Within 5 minutes of leaving Hyde Park we encountered the first problem, Mary and Rupert had broken down!!  Man of the moment, Doug Hill, soon sorted the problem and we were off again.  It was an amazing journey through London, everyone was waving to us, I felt just like The Queen and before long I was waving just like Her!!

Everywhere we passed people had to come to wave and cheer us, there was an amazing spirit of goodwill throughout the journey.

We hadn’t progressed too much further and Mary had broken down again, this was to become a regular occurrence.  Doug was amazing and mended the car every time.  We even broke down at the side of Gatwick Airport, this looked like it may be terminal, I knew it was serious as Doug took his coat off.  John was impressed as he stripped a valve down and fiddled with a few more parts and before too long Mary was good to go again.  Whilst we were all waiting a family were watching from the grass verge in their mobile home, they very kindly made us cups of tea and coffee, very welcome indeed.

We made it to Crawley, the half way point, I was hoping to stop in the Harrods café but that didn’t happen, Doug just drove through, no mince pies for me!!  Doug knew something I didn’t, we were not making good enough progress so we had to pass by. 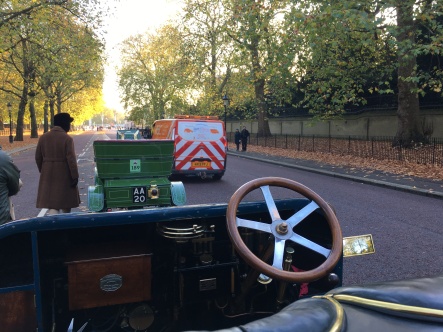 More breakdowns followed and every time Doug was the hero of the hour, or half hour as it seemed to be!!  Ever the gentleman, Doug stayed behind Mary all the journey.

We arrived at Pease Pottage hungry and shivering.  As ever Doug didn’t get any refreshments but the rest of us all managed a quick coffee and cake.  At this point the sensible decision had to be taken, Mary’s car saw its last moment of the rally and went home in a transporter.  Mary could not carry on as we would have run out of daylight long before Brighton.  It was such a shame as Mary had soldiered on all day under very difficult circumstances.  Up north we would say Mary is a top bird, I guess down south you would say she is a jolly good sport!!

We were soon motoring again and Doug got his foot down good and proper, we were doing speeds over 25mph!!. The scenery from here was really very pleasant and the traffic was much quieter.

We arrived in Brighton just before the cut off of 4.30 so we got the medal, we were the only Beaulieu car to do so.  Russell very kindly gave me the medal. 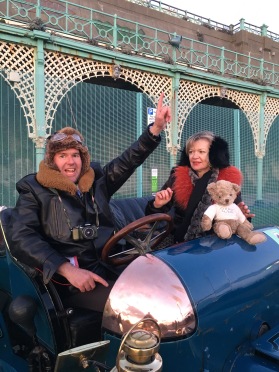 Despite the cold and hunger we had the most amazing day.

Everyone should do it at least once in their life.  John is really taken with the event so he may be bidding at next year’s dinner.  Be prepared for a long night in the auction ……..and a pound!!

I would like to thank everyone at Beaulieu for making our day so memorable.”