3 May 2017
On a chilly Wednesday in May members of the Beaulieu One Hundred were treated to exclusive tours of two of the finest motoring related private collections in the country.

Alan Chandler’s Petroliana Collection:
Alan is the consummate professional. Having placed Beaulieu One Hundred signs at the key junctions approaching his magnificent home, parking was clearly signed on arrival and he had even placed his Bentley in the initial spot so that when it was time to depart for lunch, he would be in place to lead the convoy – for which he had produced a hand-out with directions to the pub and his phone number should anyone get lost en route! Danish pastries and hot drinks were ready in Alan’s extraordinary study which gave a preamble of what we were to experience while he explained the background to his passion.
Alan’s eye for detail is evident when he talks about Petroliana.

His interest began incidentally when having built a new garage he was presented with the problem of filling the empty walls with a few period garage signs and artefacts to create some atmosphere.
Through his collection, Alan tells the story of the advent of motoring and the evolution of ‘motor spirit’ and its distribution with encyclopedic knowledge and infectious enthusiasm. He tells the same story that Beaulieu endeavors to tell but via the medium of Petroliana. Alan unashamedly says that he is no longer a car enthusiast but has become a true ‘Petrol Head’ and he is justifiably proud of having accumulated the finest collection of petrol pumps, globes, enamel signs, promotional literature and sales aids, each of which has its own story which Alan is able to recall at will.

It is easier to direct you to his website www.petroliana.co.uk where you can go on a virtual tour to see his wonderful collection.

This was a fantastic visit to a unique collection described by a passionate collector who with his wife Vanessa, made us all extremely welcome to their beautiful home.
Lunch had already been arranged by Alan at the Duke of Cambridge pub which was on the way to our afternoon tour of another amazing collection; this time of magnificent cars and with more beautiful examples of Petroliana as well.

Robert and Tanya Lewis’s car collection:
Robert began collecting cars relatively recently but clearly has an aptitude for it! The part of the collection we saw is housed in four superbly presented show halls adorned with examples of Petroliana to create a wonderful atmosphere of motoring nostalgia that any motor museum would be envious of. It is a feast of spectacular cars from the Lamborghini Mura which greets you as you enter behind which sits a 100 point concours Mercedes 300 Gullwing restored by the factory and the only car in the collection which Alan admits is not regularly ‘exercised’.

Robert is proud of his OCD inclinations (something many of us know a little about!) and with his team of engineers he restores all the cars he acquires to new (rather than ‘better than new’ – he is proud of the poor welding on his Mura which he says is exactly as it was delivered from the factory!) 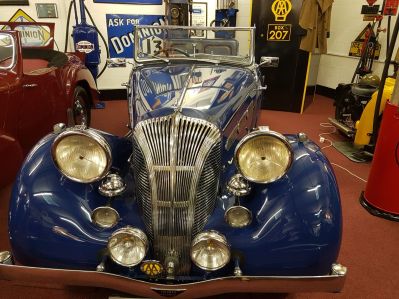 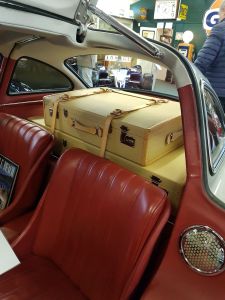 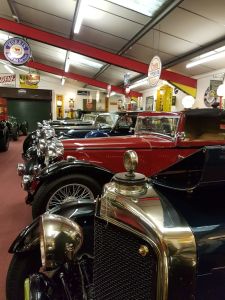 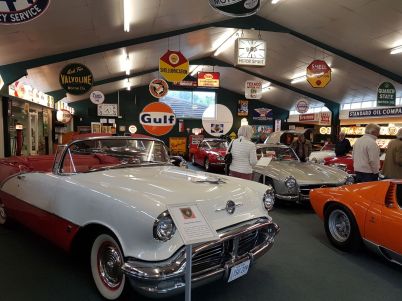 Each hall was a treasure trove of magnificently restored 20th Century cars. Robert also has a growing collection of contemporary supercars but we left that for another day.
It would be difficult to choose a favourite from this collection. The Mura was certainly stunning but the Gullwing was beyond immaculate, however it would be a mistake to overlook the more modest models: the Mini Cooper S – chassis number three with one previous owner from new, the Daimler Dart (the ‘marmite’ sports car), the Healey and the magnificent MGA – and that is just some of the choices from the first hall of cars!
In the other halls were vehicles as diverse as an Austin Seven to a C-type Jaguar, from Lagondas to a Triumph Dolomite (that’s from the 1930’s rather than the 1970’s), and from a Juan Pablo Montoya/Ralph Schumacher Williams to a Peel P50.

What a fantastic day and our gratitude goes to the generosity of our two hosts Alan and Robert. Thank you.