We’re getting ready for a trip to London to see ‘Jersey Boys’, when we see there is an opportunity to join the Beaulieu One Hundred table at the Octane Awards on the following evening – so now we’re packing evening dress as well!

Our taxi arrives outside the St Pancras Renaissance Hotel, where it has to compete with a Lister ‘knobbly’ Jaguar, The Beast of Turin, a Brabham BT7, and a Bentley Speed Six when it drops us off .  These exciting cars gave us a taste of the delights of the evening to follow.

The St Pancras Hotel is an amazingly extravagant piece of Victorian architecture and engineering which has been meticulously restored after 80 years of neglect and threats of demolition, so we arrive early to give us plenty of time to explore and appreciate the building.

Doug Hill and Ian Stanfield are up for ‘The Personal Achievement of the Year’ award for the work that Ian has done, under the direction of Doug, on the rebuilding of the Sunbeam Bluebird engine which culminated in the 90th anniversary run at Pendine in July this year. 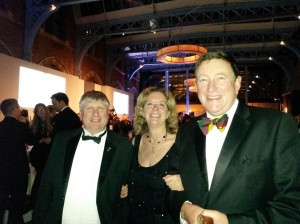 At the Beaulieu table Doug and Ian were joined by Heather Reid and four Beaulieu One Hundred members and their guests. We enjoyed a tasty meal with the wine flowing freely, all enhanced by the excellent company.

After a somewhat sombre review of the great and the good in Historic Motoring who passed away in 2015, which included Lord Montagu, Steve Rider was introduced to present the awards. His knowledge and love of motorsport was clear and he conducted the proceedings with ease and professionalism.

The big award – the Car of the Year – went to the incredible Fiat S76 Beast of Turin. Its owner, Duncan Pittaway spent 10 years sourcing the original components and fabricating missing parts for this 28 litre monster. The Beast really is enormous and truly awe inspiring. 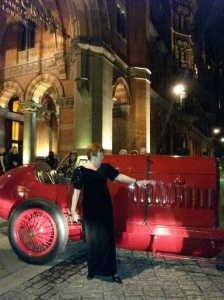 You can see it in action spitting fire and sparks at Goodwood here: https://www.youtube.com/watch?v=bsdWgmp4TaQ

(At the end of the evening we had the opportunity to admire the Beast of Turin again before I helped to push it back into its transporter. Great fun!) 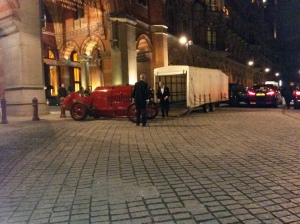 Then followed the presentations of the Awards:

Museum or Collection of the Year:  Mercedes-Benz Museum

By now we were really on tenterhooks for the decision on the Personal Achievement of the Year. Unfortunately Doug and Ian were pipped at the post by Julius Thurgood who set up the ‘Academy’ to introduce more drivers to historic motoring through his Academy for racing A30 saloons. Bad luck Doug and Ian.

After the presentation of the remaining awards the final accolade went to Dan Gurney who was give the Lifetime Achievement award. We saw the 84 year old American ace live on Skype from California. Dan Gurney is one of only three drivers to achieve wins in Grand Prix, Indy Car, NASCAR and World Sports Cars. What an achievement! Stirling Moss accepted the award on his behalf and after some typical Skype hiccups and glitches we heard Dan say –

“The modern world is nearly as good as the old world, and, as a member of the internal combustion age, I say hello, and thank you!”

All in all, an excellent evening!

Note from Editor: Thank you David and Barbara for sharing your thoughts and photos from the evening.  So pleased that you both enjoyed your first event as Beaulieu One Hundred members.