On Wednesday 13th May, 2015 Beaulieu One Hundred members were welcomed by the team at the Ford Heritage Centre in Dagenham, Essex to see Ford’s own collection of vehicles spanning more than 100 years of manufacturing.

Brian Bennett, Ford of Britain Corporate Affairs Manager, provided the introduction and then left us in the capable hands of Paul Harding and the team tasked with maintaining the heritage fleet. Paul is the Heritage Administrator and along with the team has responsibility for keeping the heritage cars in tip top condition and ready for the road.

Following the introduction from Brian, we were treated to a tour of the Dagenham site in two beautiful Ford Model T’s. With the sun shining down on us, it was an honour to ride in the car that opened travel to middle-class America and was named the most influential car of the 20th century in the 1999 Car of the Century competition.

We were able to view the cars at leisure and whilst there are some very special models, including various rally cars and a Ford GT, it was great to see a range of more humble road cars that many members could relate to either as one time owners or because their parents had one !

We were able to explore at leisure, look under the bonnets and sit in any of the cars that we wanted to in the relaxed setting of Ford’s Heritage Centre which clearly emulates the firm’s ethos of accessibility to its range of motor vehicles.

There were a number of conversations between members as we recalled our experiences with particular models including a beautiful Mk1 Lotus Cortina, a Granada Ghia and more recent models such as the Focus RS Cosworth.

One of the many highlights was Ford’s transit based ‘Supervan 3’ which has a 3 litre Cosworth engine. It was started up for us and has what can only be described as an EXTREMELY loud exhaust note which filled the entire heritage centre.

As a finale, we were given a thrill ride in two of Ford’s iconic rally cars, the Ford RS200 and an escort RS Cosworth

. . . and for one lucky member, a ride in Bjorn Waldegard’s 1977 RAC Rally winning Mk2 Escort RS1800 ……… certainly not something most of us have experienced on a regular basis ! 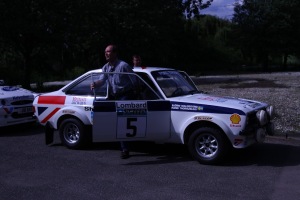 On behalf of the Beaulieu 100, many thanks to Brian, Paul and the team for a great afternoon and a trip down memory lane. It was an absolute pleasure to visit a motor manufacturer where their motoring heritage is something still to be enjoyed today rather than purely as a historical museum based record.

I would also like to say a very big thank you to Heather Reid for putting together a great 2015 members programme and as always being great company on the day.

Thank you to Barry Hadingham for such a great description of the day and thank you to Colin Digby for sharing some of his many photographs taken at the Ford Heritage Centre.